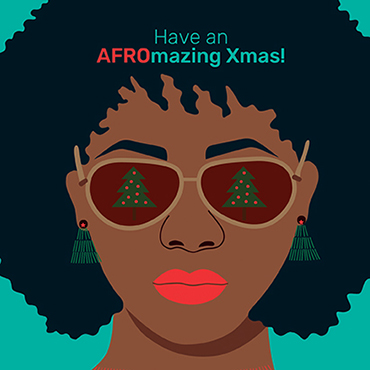 African prints are the inspiration for many of AfroTouch Design‘s greeting cards. The ‘Squad Goals’ card (right) is embellished with laser cut African Print Fabric. In many West African countries, traditionally these beautiful bold fabrics were used to identify relatives at celebrations such as weddings. Today with the ever changing face of social traditions, the wearing of African Print fabrics has become a sign of belonging and cultural identity amongst families and friends at different celebratory events. By wearing the same print fabric, groups of people are able to establish a sense of belonging. These fabric print patterns are the heart of all  AfroTouch Design cards.

A gap in the market

Many greeting card publishers get involved in designing and producing greeting cards because they see a gap in the market for the type of cards that they’d like to send, this  is certainly true of many of our black publisher members. For example Nicola Lespeare’s eponymous brand “…was born out of a vision to transform the lack of visible representation and availability of Black character cards within the greeting cards industry” says Nicola. “I’m dedicated to making this vision a reality by using my love of illustration to create imaginative cards that celebrate and elevate black women, men and children”. Nicola Lespeare’s illustrated cards demonstrate the fabulous versatility of afro hair and are predominantly influenced by Black women styled in on-trend colourful looks that beautifully accentuate deep skin tones.

Huetribe is a diverse greetings card company which aims to increase representation of different races and sexualities on UK greeting cards. Founder Tineka Smith has been featured in Huffington Post, Mashable, Yahoo, PG Buzz and the BBC speaking on diverse representation, and Huetribe became the first publisher carried by retailer Scribbler that focuses on representation for both race and sexuality.

Aisling Crosland, Head of Design at Scribbler, said “Scribbler has worked for years now with designers to include diversity in their ranges, this summer they pledged to try to do better and go further. After conversations with some of their existing designers, such as Cherelle from Kitsch Noir and Tineka from Hue Tribe, it became clear that simply having these designs wasn’t enough. Eager to give the designers a push to their customers, as well as help build up diversity in their ranges, Scribbler ran a “Support black designers” campaign. Designers taking part in the campaign were given the opportunity to appear on homepage banners, social, marketing, and more, with sales made during the campaign earning them an increased royalty as well as profits being donated to the Damilola Taylor Trust on behalf of Scribbler and the designers themselves”.

Diversity in the card industry

The GCA brought together retailers and publishers earlier this year to discuss the issue of  diversity in the card industry, see report in trade magazine PGBuzz, and understand how the industry continue to support this growth area. Britain leads the world in greeting card innovation and design, a pattern that looks set to continue!