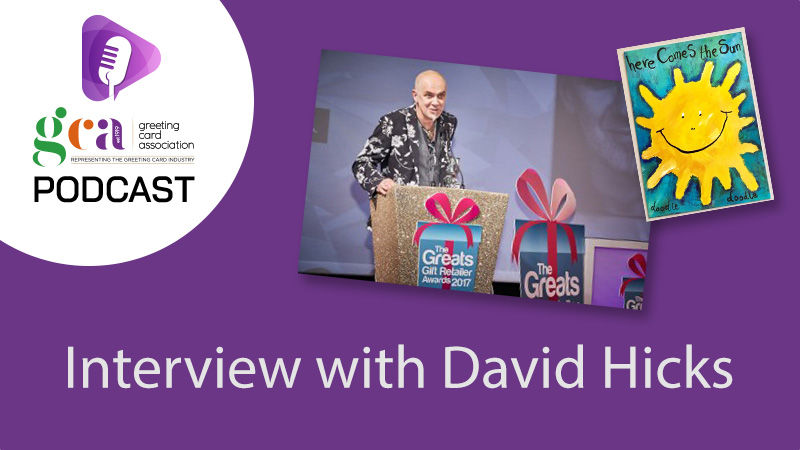 The Greeting Card Association’s podcast series is a look at key greeting card designers, publishers and individuals whose passion, drive and talent has influenced and shaped the history of our industry.

It is hoped that listening to those who have made a major contribution to our industry talk about their journey, and advice they’d give their younger self, will help and inspire the next generation of our wonderful industry.

David Hicks sadly died on 8th April 2022. We are releasing this podcast in tribute to his contribution to our industry.

GCA CEO Amanda Fergusson said “David made a major contribution to our industry. His quirky, of the moment, designs brought greeting cards to new and young consumers from the late 1980’s onwards. His leadership at the GCA changed the nature of our trade association, opening it up to everyone working in the greeting card industry. He was a generous, humble man, who didn’t suffer fools and described things exactly as they were. I will miss his sage advice and dry humour.”

In January 2022 Amanda Fergusson met David Hick’s, founder and owner of Really Good and Soul, at his home on the River Thames in Wandsworth to learn how he started his business and the key moments that led to his business growth. David speaks candidly about the decisions he’s made, reflecting on them and sharing the advice he’d give to his younger self.

David Hicks’ Really Good Card Company was a key feature of the 1990’s and 2000’s, known for a broad range of cutting edge card designs, David launched a second card business, Soul in 1997, and branched out into gifts changing the name of his original company to Really Good – which it was!

David also played a key part in the history of the GCA. As President he brought in changes that led to the GCA membership being open to everyone working in the industry, and the GCA expanding it’s remit to provide support and advice to members of all sizes.

The messages he shares for those starting out today, his personal passions and where he’s happiest, complete a really interesting snapshot into a business that published many of the iconic cards of their day and played an important part in the UK greeting card industry.

David’s 33 year career in the greeting card and gift industry started in a bedsit in Oxford, from where he started selling postcards on commission, and led to him becoming a publisher exporting products all over the world.

David speaks eloquently about how he developed relationships with the artists that worked with him, his decision to subcontract warehousing and concentrate the business focus back on design and production. He also discusses opening his second business, Soul, followed by his successful expansion into gifts. Selling three quarters of a million units of the most successful product in his iconic Man Tin range, left him navigating the challenges of maintaining supply of product manufactured in the Far East.

David also talks about the importance of ‘doing the sums’ and keeping an eye on the bottom line. He shares his motivations and also reflects on his backup plan, talking about where he is happiest and his personal passion for photography.

Photographing people across the world in their day to day life David regularly returns to the  importance of human relationships in both building a business and capturing those ordinary moments and sentiments that make a good greeting card and bridge the gap between people.

The Enterprise Allowance government scheme, was key to helping David start his business in 1987, meaning that he had £40 a week income while he worked to get his business off the ground. David speaks about the trust that he is establishing to support the start-up greeting card publishers of the future.