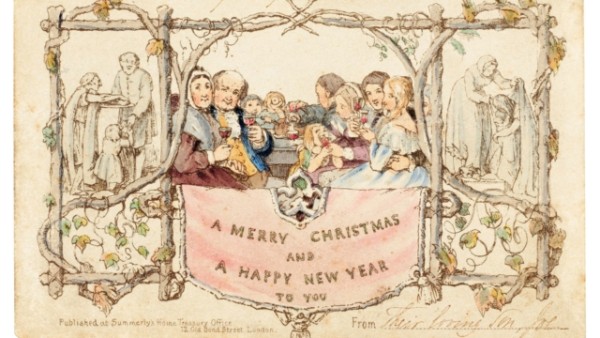 Christmas cards connect us with friends and family across the world, sharing love, humour and good cheer and playing a key part in our Christmas decorations!  But did you know, Christmas Cards have been a part of Christmas tradition since the Victorian era? In this article, we look at how some of the Christmas traditions have been influenced over time.

The Victorians loved Christmas and they were instrumental in codifying the customs, themes and imagery of Christmas that are still so important to us today. With the influence of Charles Dickens, rising consumerism and deep feelings of nostalgia, a particular vision of the Christmas season emerged in the nineteenth century, one that can be observed through the ever increasing printed material produced at the time

The first Christmas card was sent in 1843 by Sir Henry Cole. Since then, the development of Christmas customs, themes and imagery, can be traced through Christmas cards and also advertising created during the nineteenth century. The Stationers’ Company collection of copyright records, held at The National Archives, is one particularly fruitful area for this investigation. These records consist of illustrations, greetings cards, advertisements, branding and packaging submitted to Stationers’ Hall for copyright protection between 1862 and 1912.

There are some key themes which emerge when you look at Victorian Christmas cards. One is nostalgia – a focus on looking back to an idyllic past. As a result of the rapid industrialisation and huge changes in society that had occurred in the early nineteenth century, many liked to hark back to an earlier time which seemed simpler and more pleasant. This interest can be seen in Christmas cards showing medieval imagery and styles. The Victorians also loved the innocence and simplicity of childhood subjects, but this was also perhaps related to changes in parenting styles, as middle-class parents indulged their children more readily. 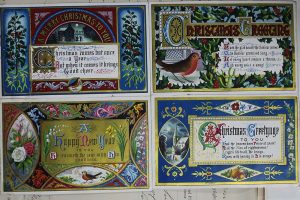 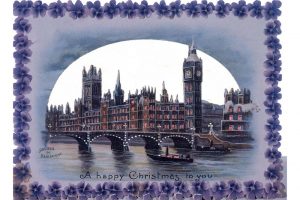 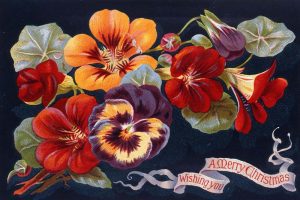 Religious scenes do also appear in Christmas cards, but the sheer variety of other subjects does suggest that, in the later Victorian period, Christmas was already strongly associated with more secular ideas. Christmas imagery was also not straightforward as it is today. As well as images of robins, holly and snowmen, you might be just as likely to find cards decorated with coral, insects and flowers.

Following the Royal Family bringing the custom of the Christmas tree to Britain in 1848, you can also trace the appearance of trees in Christmas cards, and their growing popularity as a Christmas symbol over time. Similarly, the figure of Father Christmas can be seen developing and he is soon employed to advertise events and products! 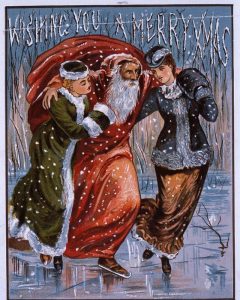 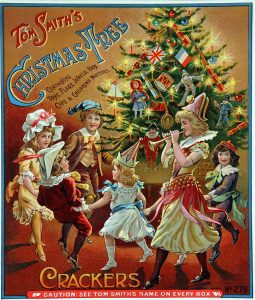 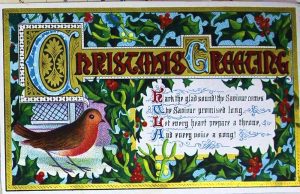 Designers and manufacturers were also very creative with their use of paper in the creation of Christmas cards. They experimented with gilding, paper lace, folding and cutting paper and glitter.

The invention of the Christmas Cracker

Another example of creativity was the invention of the Christmas cracker. In 1847, Tom Smith, who was a confectioner, wanted to find ways to boost sales of his bonbon sweets, which he sold wrapped in individual papers. The Christmas cracker developed from there, booming in popularity in the decades that followed and attracting other manufacturers to create their own versions. The copyright collection holds a large number of advertisements for Tom Smith’s crackers.

As the middle and upper classes were spending their disposable income on enjoying the Christmas season, inequality in Britain was worsening. The gap between rich and poor was widening and the Christmas experience for the majority of poor working-class people was completely different.

Some middle-class Victorians turned to charity to attempt to make a difference, and this idea is one which, with the influence of Charles Dicken’s A Christmas Carol, has become integral to the Christmas season.

Through the copyright records of the Stationers’ Company held at The National Archives, particularly Christmas cards and advertisements, we’ve seen how the Victorians developed their enthusiasm for Christmas and spread their particular vision of the season throughout society and across time right up to today.

The Victorian upper and middle-classes commercialised Christmas for the first time, at a time when levels of poverty in Britain were extreme. This created a paradox between the materialism and greed of Christmas consumption and the Christian concept of charity which the Victorians still associated with the season. As well as giving us their wonderful customs and their colourful vision of Christmas, the Victorians have also left us with this paradox, something which we still try to reconcile today.

Cards, Crackers and a Stationers’ Christmas [YouTube link] This is a recording of a highly informative webinar held in 2021 – a must watch for anyone interested in the history of Christmas Cards.

Who Sent the First Christmas card