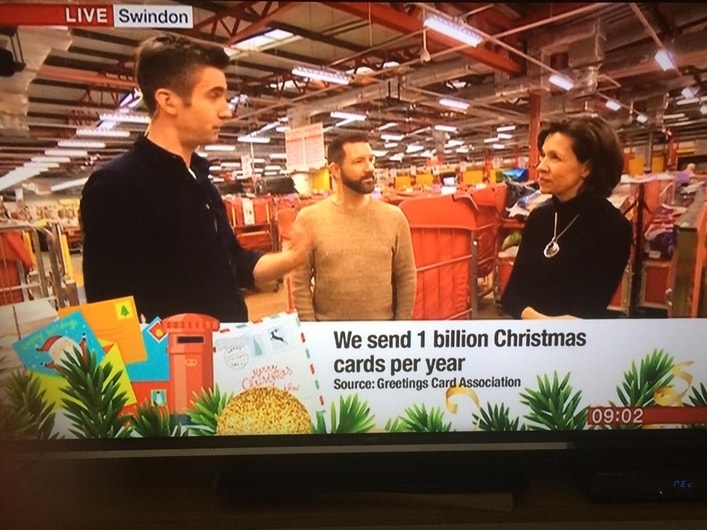 Over 1.5 million people started their morning today being reminded to write and send their Christmas cards as Amanda Fergusson, the new ceo of the GCA appeared on the BBC Breakfast twice during the programme, as well as on the BBC News 24 channel.

Filmed on location in Royal Mail’s busy main sorting office in Swindon, setting the scene, BBC journalist Ben Thompson interviewed Amanda on the health and heritage of the industry as well as the current habits of the card buying public.

A fortnight into her role, and making her live TV debut Amanda was flawless, getting across messages about how the sending of Christmas cards is a British tradition that is very much alive and kicking as well as the emotional value of sending cards, championing the uptake among millennials.

“We will be sending almost a billion Christmas cards this year,” said Amanda. “Interestingly, 18-34 year olds are sending more cards than they were a decade ago,” she added before nailing it by saying. “Cards really are the best way to send a tangible message to someone you care about.”

Elaborating on the fact that 94% of all cards are still bought in bricks and mortar retailers, Ben went so far as to say that greeting cards are effectively “breathing some life back into the high street.”

Ben showed great interest in how card sending extends to our pets, with Amanda highlighting how cards to pets are a growing area, something that was then picked up on in the BBC studio with anchor presenters Charlie Stayt and Tina Daheley asking for viewers to share their news of sending cards to their pets.

Commenting on the whole experience, Amanda said: “It was a great opportunity to not only encourage people to send Christmas cards and cards in general, but to get across that this is very much an important British tradition that is being embraced by the new generations too.”

This article was written by Jakki Brown  https://www.pgbuzz.net/gcas-ceo-amanda-fergusson-appears-on-bbc-breakfast/