Why are Valentine’s Day cards so popular? 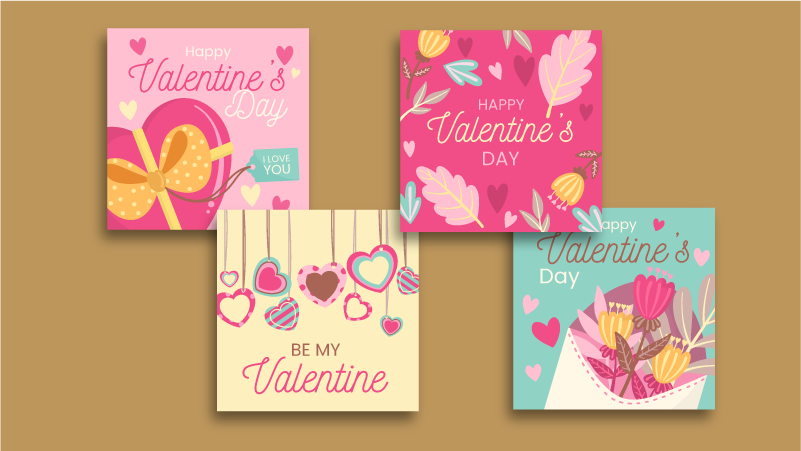 Valentine’s Day is celebrated across the world on 14th February each year. Why is this date the universal date for lovers and how important is it – read on to find out!

Why are Valentine’s Day cards so popular?

Red roses wither and fade, chocolates get eaten and vouchers are quickly spent and forgotten.  The only real alternative is a beautiful Valentine’s card, expressing undying love and constancy.

Receiving a greeting card creates a strong emotional connection, and cards often become precious keepsakes that are often handed down through the generations, often illustrating relationships between people long deceased.

History has it that true romantics never sign the cards, believing that the recipient should know immediately from who it comes. The postmark can be a clue, but some senders of cards test the fidelity of their lovers by travelling miles from home, even abroad, to post their message.

The History of Valentine’s Day

The history of early spring romance goes back to ancient times, when there were pagan festivals celebrating the blossoming of love; a fertility festival was celebrated on February 15th for this was the date when birds were supposed to begin their mating.

The tradition of sending love tokens and notes on 14th February has been around for hundreds of years, with the earliest surviving valentines dating from the 15th century.  In 2019 the World’s oldest known Valentine’s Card was sold at auction for £7,200, demonstrating the marketable obsession for this romantic tradition. Early Valentines often took the form of handwritten notes or poems, but in the 1800s, with the availability of cheap paper and development of new printing techniques, Valentine’s Day cards became available to everyone as well as artists and poets.

However, it was those cruel Roman emperors, persecuting Christians, who we have to thank for modern Valentines. One in particular, known as Claudius the Cruel (actually Claudius II) forbade soldiers to marry, lest during campaigns they pined for their wives and families. A Christian priest named Valentinus defied the order and carried out secret wedding ceremonies for which, when the emperor found out, he was thrown into prison. While there, he befriended (and probably fell in love with) the blind daughter of his jailer; and some accounts say his faith cured her affliction. On the eve of his execution he sent her a farewell note, signing it: ‘from your valentine’. The date? February 14th, of course!

Later the pagan festival of Lupercalia was declared by Christian priest to be the Feast of St Valentine; and thus, began a tradition that has become peculiarly British…the sending of Valentine cards. However, it was that lover of lovers, Henry VIII, who finally made the day official – a Royal Charter of 1537 established that February the 14th as St Valentine’s Day. Other nations do celebrate the day, but not the gusto and passion of the Britons.

Although the French are lukewarm about the festival, the earliest Valentine message held in the British Museum was sent in 1450 by a French aristocrat. Charles, Duke of Orleans, was a “guest” of the British monarchy in the tower of London after the Battle of Agincourt and he sent the Valentine to his wife. It wasn’t until the early 1800s that the sending of elaborate printed cards became fashionable.

If you love me…

The British are among the most romantic in the world, at least when it comes to sending the Valentine’s cards. According the annual market report carried out by the Greeting Card Association over £52m was spent on Valentine’s Day cards in 2019, with an average price of £2.21 which is nearly 9% more than we spend on our Mum’s on Mother’s Day.*

In 2019 nearly 24 million cards we sent across the UK declaring love, which was nearly 10% more than we spent the previous year.*

Traditionally many lovers travelled to the Wiltshire village of Lover to send cards, to stress their devotion to, and sometimes to confuse, their loved one. In response to continued demand, after the closure of the local PO, residents open a temporary ‘Post Office’ each year in the run up to Valentines to ensure that the Lover post mark lives on.

In the 18th Century one enterprising poet published ‘The young man’s Valentine writer’, a series of verses covering every sentiment to help tongue-tied young gentleman to express their feelings; it sold like hot cakes. Other similar books followed, including one with poems for women to use; some even gave verses in which it give the putdown to an unwanted suitor.

These days most prefer to send a card. Greeting cards have played an increasing important part in British communication since the first Christmas card was sent in 1843 by Sir Henry Cole. Card sending in the UK increased dramatically in the early 20th century, with cards playing a particularly important role in communication during the two world wars. Post-war sending a greeting card increasingly became the chosen way to mark special occasions, express sympathy and just say Thinking of You. Scientific research undertaken in 2017 by Royal Mail demonstrated the impact of receiving a greeting card. Most of us remember receiving our first Valentine’s Day card and many have kept them!

Today Valentine’s cards are often also sent to other family members in their list, especially if they feel they need a little romance injected into their lives.

One of the most prolific Valentine card writers was Queen Victoria, who delighted in sending perfumed missives to Royal aides on February 14th and watching their reactions when the post arrived during her long rain there was a boom in leap year cards, when women were traditionally allowed to pop the question. Hilarious cards were produced, many showing large women in hot pursuit of small men; but although the customer remains, the sending of leap year cards was a short-lived phenomenon.

Valentine’s Day is now as established calendar event where we annually remember and celebrate those we love the most. The Greeting Card Association provides a free down-loadable toolkit for retailers to use remind everyone to buy their cards!

← Previous: 100 years of Cards - The GCA’s 100th Anniversary Exhibition Next: The Origins of Mother's Day →