Press Release: 2014 Launch of National Thinking of You Week 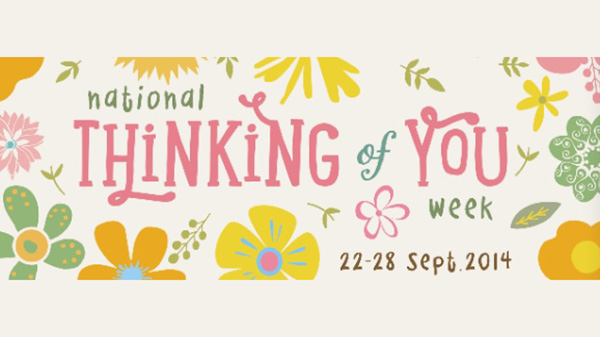 The UK’s first National Thinking of You Week campaign believes that five minutes spent writing a personal greeting card equates to days of happiness for the recipient – and is urging friends and families to kick-start the trend from September 22 to 28.

The inaugural National Thinking of You Week, which aims to highlight the emotional power of sending and receiving greeting cards, can be added to diaries for the first time. The objective is to create a wave of love and happiness across the nation by joining people together to send a card day to different people during this week.

Sharon Little, chief executive of the Greeting Card Association, believes that the five minutes spent sending a card can raise spirits for hours, if not days.

She said: “The idea is to send cards to different people during a one-off week in September to raise a smile and give a boost to anyone who would really appreciate the thought.

“Cards are a tangible messenger of caring. They are often displayed for weeks, prolonging happy feelings by just being there on the mantelpiece, being a reminder that someone cares and took the time to send it.

“You could write a message just say to hello, to tell someone you love them, to make them laugh, be supportive in a time of trouble, wish them better, kiss and make up, or just to say ‘thinking of you.’”

It’s been scientifically proven that receiving a handwritten card makes people feel much more special and appreciated than receiving texts, emails or Facebook messages. Receiving one out of the blue is even more special.

The positive feelings generated by receiving cards are good for health and wellbeing, according to cognitive neuroscientist Dr Lynda Shaw.

She said: “I firmly believe that receiving cards increases self-esteem, helps to stave off feelings of loneliness and isolation and even to ward off the early stages of depression.”

So how do people get involved?

Sharon added: “Spend just five minutes each day during this week to write and send a card to a special person and encourage family members, friends and colleagues to do the same. Feel free to give the cards in person or pop one through a neighbour’s letterbox.”

Card sending events are being held across the country. People can look out for National Thinking of You Week flyers and event posters in their local communities.

The scientific research mentioned was carried out by Mindlab International, an independent scientific research organisation in 2013. Mindlab measured emotion in the brain using a 21 channel Mindmedia Nexus 32 EEG (electroencephalography) system as well as carrying out an Implicit Association Test. The results showed a much greater emotional reaction to receiving handwritten cards as opposed to emails, texts and social media messages.